BT Group plc is the privatised UK state telecommunications operator and is the main fixed line telecommunications and broadband Internet provider in the UK. It operates in over 170 countries and is one of the largest communication companies in the world. After the telephone was invented, the General Post Office began to provide telephone services from some of its telegraph exchanges. In 1882 the Postmaster-General began to issue licences to operate telephone services to private businesses. The GPO's main competitor, the National Telephone Company, was absorbed into the GPO in 1912. The GPO became the Post Office in 1969 and British Telecom as a brand was introduced in 1980. In 1981, this became the name of Post Office Communications, a state-owned corporation independent of the Post Office. In 1982 BT's monopoly on telecommunications was broken when a licence was granted to Mercury Communications, which ceased to exist in 1997 after being amalgamated into Cable and Wireless Communications. In 1984 BT was privatised as British Telecommunications plc and changed its trading name to BT in 1991. In 2006/7, BT had an annual turnover of £20.2 billion.

BT has expanded in recent years into broadband Internet service and bespoke solutions in telecommunications and information technology. BT Total Broadband was formerly known as BT Yahoo! Broadband, BT Openworld and BTBroadband. Now all the sites that used to host these services, such as www.btopenworld.com and www.btopenworld.co.uk, display information regarding the TotalBroadband packages only. It operates in partnership with Yahoo! and customers get free access to BT branded Yahoo! services. You can access BTYahoo broadband services via the BT website, though they have left up the dedicated sites at www.btinternet.com and www.btinternet.co.uk. BT Internet broadband customers may also use a B.T. Internet browser, which is an Internet Explorer front-end with access to BTYahoo Internet services. The software is aimed at less experienced computer users as part of the BT Home Hub software but is currently not compatible with Windows Vista, as Internet Explorer 7 offers the features of the browser with the BT Yahoo! tool bar. The BT homehub is a wireless Internet router that supports VoIP Internet calls and is compatible with existing DECT handsets. It connects to the Internet with a standard ADSL connection. Home hubs work up to 50m away from your computer indoors although in areas of heavy interference may only work up to 10m away. On a phone line network homehubs can be up to 150m away from the computer.

Currently three different B.T. broadband packages are available to home users. Option 1 is for light broadband users, 2 for heavy usage and wireless and 3 for unlimited downloads. All packages offer 8 Gb downloads and a free BT wireless Home Hub. With the help of the BT Total Broadband welcome pack, you can be set up in 30 minutes. If you don't want to install your broad band yourself, you can arrange for a BT Home IT engineer to come to your home for a fee. All BTinternet broadband home packages include BT Vision ready - Freeview and TV on demand, as well as 24-hour support and 5 Gb free online storage. Obviously these packages change from time to time so visit their main site at www.bt.com (curiously, despite the fact that Nominet states they do not allow two letter .co.uk domains www.bt.co.uk works too) to get the most up to date info on all their services, pricing and what is included.

By clicking on the BT broadband availability tab and entering your telephone number or postcode in the BT broadband checker, you can use the BT broadband speed test for your location. You can also check whether your particular computer is compatible with BT broadband home. So long as you have your MAC code, you can easily change to BT broadband UK from your existing provider. Delivery and activation of BT's broadband service can be on a date of your choice from five working days after you place your order. An online tracker helps you to see your order's status. On the subject of online services, BT have taken the care to get you to their broadband section no matter what you type in to your browser e.g. www.broadband.bt.com and www.broadband.bt.co.uk or even the lesser attempted www.bt.com/broadband and www.bt.co.uk/broadband will all bring up the relevant information. Such forward thinking for advanced web users that tend to take chances to speed up their surfing has not been shown by any other company we have reviewed so far.

BT business broadband offers packages for small and medium sized businesses. BT's business total allows you to combine your BT business phone line with broadband and BT internet access can be activated at the same time as your phone line is set up. There are three separate options: The first and most basic option is intended for light users or individuals. Option 2 offers a broadband connection ideal for mobile workers or small offices with and inclusive BT business hub and 250 minutes of BT Openzone hotspot access every month. The third option includes additional security and support. Business dial up Internet accounts are available on a pay as you go basis. BT Broadband Office includes a range of talk features such as call waiting, call diversion and three way calling. The DSL connection allows up to 8Mbps download speed and unlimited monthly usage allowance. If you prefer BT wireless broadband, the BT Business Hub has wireless capability. All business services can be viewed on their dedicated website at www.btbroadbandoffice.com - note that www.btbroadbandoffice.co.uk, though owned by BT, does not go to the dedicated site but, like with other services, they have thought ahead for you savvy web types and both www.bt.com/business and www.bt.co.uk/business both go to the relevant information.

BT Internet UK Openzone allows you to connect to the Internet at any access hotspot in cafés, hotels, stations, pubs and airports in the UK and Ireland. Web mail functionality when using BT wireless internet means that you can pick up your email from any internet connected PC and BTbroadband office also offers 50Mb web space to host your website. A separate VOIP line through Business Broadband Voice allows you a separate voice line that can be used for outbound calls, keeping your existing line free for incoming calls or to give someone in your office a line of their own. Workspace Lite is a tool that allows BT.com broadband users to share and store information online with an extranet that all of their your employees can access. It provides one place to store documents allowing staff to share information and work collaboratively and has the added benefit of backing up important files in one place. Twenty-four hour support is available from the business helpdesk support, via email or telephone.

Any special offer made for BT Broadband appears in an advert on the What's New section of the website. A full review is offered on all products and 150,000 different products are available in BT's online shop. Reviews of products can also be added by customers.

There are only two letters in this company's branding - B and T. So you would think that our user protection test would come up with no possible errors. We thought so too, but as always there are a few things to watch out for. Though they have made it really, really easy for people to get to the right place by setting up redirects for people who use subdomains or folders with the service being searched for, several of the common solid web addresses such as www.bttotalbroadband.com, www.totalbroadband.com, www.btbusiness.com and www.btbusiness.co.uk not only don't display any information on those suggested services but are not even owned by BT. Things get slightly strange after that, for example they do own www.btbroadband.com and www.btbroadband.co.uk but didn't stretch for the extra £15 for www.bt-broadband.com or www.bt-broadband.co.uk with the same story for the hyphenated versions of their dedicated Yahoo sites i.e. www.bt-internet.com and www.bt-internet.co.uk which sadly leaves them open to being misdirected at the very least and at the very worst, phishing. Of course we've only checked these handful of variations but there are many, many more. BT is a huge organisation with a very up to date visual presentation of their services on their website. If the page you end up on does not look like it was created by a billion pound company then you probably want to try again! Once you know you are on the correct site, bookmark it so that coming back is not so much of a gamble. 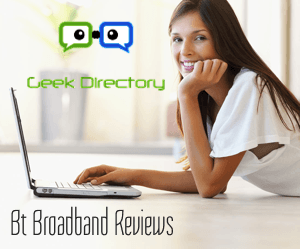