Vodafone is the largest mobile telecommunications network company in the world (by turnover) with a market value of about £100 billion in December 2007. Based in Newbury, Berkshire, they have equity interests in twenty-five countries and partner networks in a further thirty-nine countries. It now has over 150 million customers. The name Vodafone comes from "voice data fone". Founded in 1984, Vodafone became the biggest company on the London Stock Market in January 2000. Vodafone was originally a division of Racal Electronics Plc. In 1982, the company won a tender to build and run the second UK cellular telephone network, which was launched on 1st January 1985 becoming fully independent in September 1991. By 1987 it was recognised as the largest mobile network in the world launching its digital (GSM) mobile phone service - the first in the UK - in 1991. Vodafone's first high street shop opened in 1993 and in 2000 the acquisition of Mannesmann AG almost doubled the size of the Voda fone Group. It introduced instant messaging to its networks in 2001 and that same year made the world's first 3G roaming call between Spain and Japan. Arun Sarin succeeded Sir Christopher Gent as Chief Executive of Vodafone Group Plc in 2002.

Vodafone UK offers a wide variety of payment plans for monthly contracts. These are divided into best for texter plans, best for talker plans and best for both plans so that you can choose the one most suitable to your needs. Costs of calls and texts vary depending on the plan you choose. Pre-paid monthly contracts start at low rates. The anytime prepaid monthly price plan costs a fixed amount for the first three minutes each day, after which the rate drops for subsequent minutes. Those who don't wish to make daytime calls may opt for Anynet with which daytime calls are more expensive than weekend calls, although texts, picture messages and video messages are the same rate for any time of day. Voda fone's pay as you go contracts offer free weekend calls and texts when you spend and use a specified amount during the week.
Whether you have a Vodafone pay-as-you-go contract or monthly contract, it's possible to browse the Mobile Internet on a low daily rate deal. If you browse only a few pages a day, using less than 0.5MB, you only pay for those pages. Paying a small daily fee lets you view 600 web pages in a day or download 15 minutes of video. Customers who want to browse without a daily limit can buy Voda fones Web browsing pack. This gives you a 120MB monthly allowance. The first month's subscription is free.

Vodafone mobiles on offer include most of the common brands, including Nokia, Sony Ericsson and Motorola. Sims only deals include an offer, which gives 500 texts and 150 free minutes per month. A SIM card can be bought online for both monthly and pay as you go contracts. Vodafone mobile phones can be bought online from their website or through one of their many stores. Whether you decide on a PAYG deal or a monthly contract, you can also take advantage of the many mobile phone accessories offered by Voda phone.

Vodafone's music station offers unlimited music tracks for a small weekly charge, although it's free for the first week, allowing you to give it a try before committing yourself. It offers unlimited access to over 1 million tracks, the opportunity to select from recommendations unique to your profile, the ability to create playlists to share with your friends and the chance to catch up on all the latest music news.

One of voda phones most recently launched services is InsideOut Beta. This allows you to text and call between the online game Second Life and the real world. With Vodafone InsideOut you get a handset and a HUD (Heads up display). The handset shows when you're talking to someone and the HUD is where you'll make and receive calls and texts. The phone is free from the Vodafone InsideOut island in Second Life and usage of Vodafone InsideOut initiated from Second Life is free-of-charge until 31st March 2008. After this, messages and voice calls initiated inside Second Life may be charged per minute or message. Usage from your vodafone mobile phone calling into Second Life is charged according to your tariff plan. As virtual phone numbers are assigned from a pool of German numbers, outgoing calls or texts from your real phone to Second Life will be charged as a call or text to Germany. 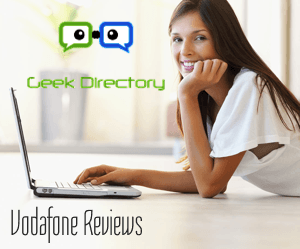