>> Samsung has announced the release of their WB650 and WB5600 12.2 mega-pixel cameras. The point and shoot cameras with an amazing 15x optical zoom even have built in GPS technology so images can be geo-tagged from anywhere in the world. The camera will display the name of the city and country from where the photo is taken all without having to upload the photo to the internet. Samsung say that these camera make taking photos and video effortless and raises the bar on these types of cameras.

>> A new social networking app for the iPhone has been released by Pure Midas. Known as Cuspus, the app allows people to make easy updates to Twitter and Facebook at the same time. It will update the users location and a message and allow them the chat with other Cuspus users. The app is free and does not feature any advertising. The message sent to the networking sites will be about the location the user is in. This means that the user does not need to come up with a message of their own. The detail of the message can be chosen by the user. The app also has a pinpoint function allowing friends to work out exactly where someone is, if the Cuspus user has allowed it. The app can be downloaded from iTunes.

>> Nokia is to make its satellite navigation software free to owners of its smartphones in what is being seen as being in direct competition with iPhone and Google. Nokia make 4 out of every 10 phones sold worldwide and any one with a GPS enabled device can download its navigation service. Those with some older phones will be able to download the service in the next few weeks. Full satnav maps will be available for 70 countries and extensive maps will be available for 100 others. The applications are available through the Ovi Store.

>> Users of T-Mobile or Vodaphone MiFi devices are being warned that they may be being left open to hackers. The vulnerability of the MiFi unit which allows the user to to connect to mobile broadband, may allow hackers to change settings on the phone, in particular when the user is connected to a malicious website. If GPS is connected by the hacker, the users location may be able to be seen. Novatel have said that they will provide a patch.

>> The UK Location Council is to launch a new website to allow users to evaluate location information. Known as Geoportal, the site will publish data from a number of sources to offer information on a particular location. The information will be used to allow emergency services arrive more quickly, to help formulate policies on climate change and to ensure services meet the needs of people living in a particular area along with a range of other uses. The website will also run in partnership with the new data.gov.uk website to benefit the public and the economy.

>> Reports from Tesco have indicated that despite the latest gadgets often being quite pricey, the most popular tend to be the cheap and cheerful. The VX1i Party Phone sold an amazing 10,000 units in just two weeks leading up to the new year and remains one of Tesco's best selling gadgets. The handset is sim-free and can be used by by anyone on any network with their own number. It retails at just £18.99. According to the Chief Executive of Tesco Telecoms, Lance Batchelor, (no, really, that's his name!) the phone was designed as a temporary or replacement phone, but the popularity has taken them by surprise. Their research had found that 8 out of 10 women find it annoying having to take a handbag with them when they go out and 69% of people do not like large phones in their pockets. So the tiny party phone is the perfect alternative.

>> A series of one day strikes are taking place at Fujitsu over the next two weeks. The strikes are a response to the plan announced in August to make 10% of UK staff redundant. Unite have suggested that the company may be disproportionately targeting women and minorities for redundancy, a claim the company has denied. Final salary and pension schemes are also due to be frozen with pay packages dropping by 20% as a result. 1500 of the 12000 staff at Fujitsu are Unite members.

>> Techradar.com have released a list of the top gadgets to allow for a better nights sleep. The aXbo alarm clock will tell the user the best time to get up to maintain a perfect sleep pattern. It measures sleep patterns via wristbands and will wake the user at the time which suits them best and as close to the alarm time as possible. The iPhone app, Sleep Cycle works in a very similar way but monitors movement. The Sleep Trek3 will study the users sleep patterns, respiration, snoring, pulse rate and oxygen saturation, but comes in at more than £2400. Lovers of YouTube can have their favourite video wake them in the morning with the onlineclock.net site. Finally the Dreamate Sleep Inducer works by massaging acupressure points via the use of a wristband and claims it will help aid relaxation.

» The Apple iPad? No thanks.
» 3D Films, Football, Fashion and now Bus Stops
» iPhone Insurance Fraud on the Rise
» Eighties Nostalgia Hits the Gadget Market
» iPad Prices Suggested ... Like you needed more reasons to hate it ...
» 3D TV is Finally Out There! 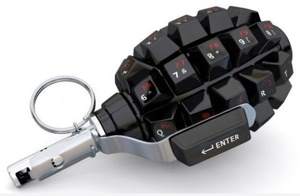